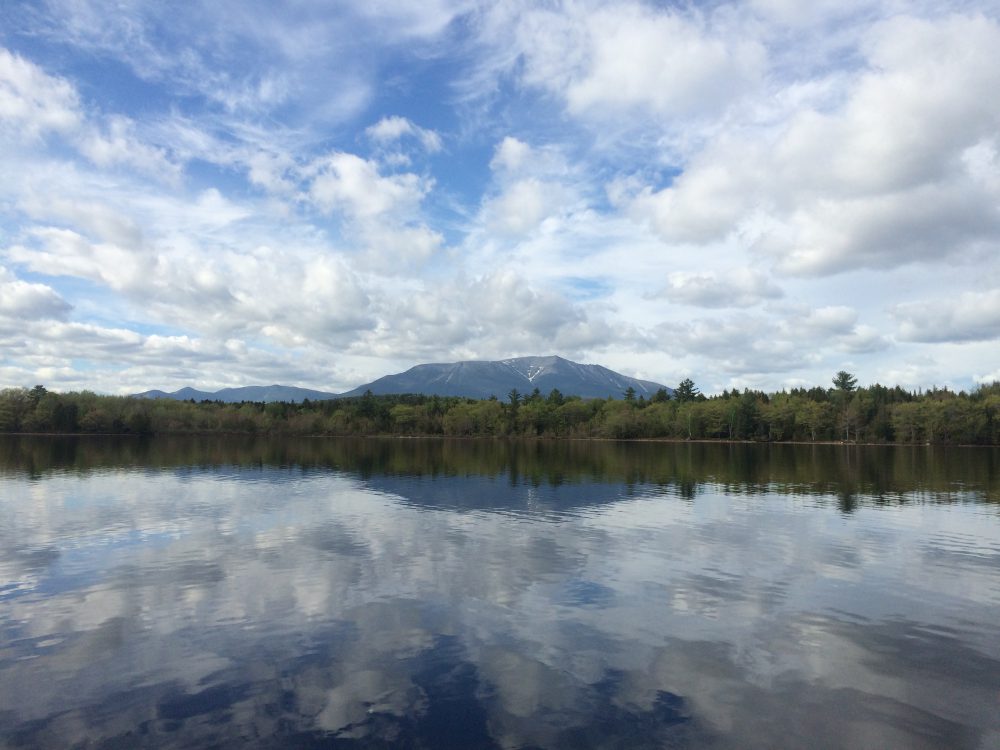 Amelia snaps a picture before we put in.

After a test of my RAV4’s tires and suspension coming down a 4.5 mile stretch of rocks and pits, Amelia and I stood on the perhaps manufactured beach along the Debsconeag Deadwater at Omaha Beach.  We were swarmed immediately by Maine’s patent cocktail of black flies and mosquitoes, in spite of our best efforts with bug spray.  The nearby campground was filled with loud people.  I try not to be terrifically negative about “car campers,” as I’ve been one, but I find their presence in the wilderness intrusive, since they merely trade tent for house and drag along generators and radios.  Attempting to duplicate the comforts of home in a wilderness setting is, to me, ridiculous.  I’m not sure what bothered me more:  the insects or the blaring country music.  I could understand this at a trashy trailer lot “campground,” but given the inaccessibility of this serene locale off of the Golden Road, it was horribly out of place and diminished the character of the wilderness. Amelia enjoys some wading with Katahdin in background.

This part of the West Branch of the Penobscot barely had a discernable current (hence “Deadwater?”).  As we put in and paddled away from shore, the bugs subsided. We headed west towards the inlet into First Debsconeag Lake, the alternating depths affording Amelia an opportunity for some wading.  The water was so still, and in the distance, the clouds cleared and we could see the lingering rivulets of ice in the spurs on Mt. Katahdin in the distance.  Once we got away from the din of the campground, the quiet was only broken by our conversation and our wooden paddles breaking the water.

As we paddled towards the inlet from the Deadwater, on the left bank we saw some tell-tale sign of beavers.  Gnawed stumps, trees that were obviously “works in progress” by the prodigious rodents, and logs fallen into the water, but no sign of actual beavers.  As we rocked back and forth in the wake of a motor boat, we didn’t speculate long on the beavers’ invisibility.
Our goal was to make it across the First Debsconeag Lake, take the portage to the Second, and find a wilderness campsite there.  The campsites along the First Debsconeag were generally occupied by waterborne variants on the class of campers at Omaha Beach.  They arrived with larger, motored watercraft, unloaded their “camp,” and polluted with noise ill-suited for the wilderness.  We knew taking the path to the Second Debsconeag Lake would take us away from this, as it was unattainable for people accustomed to easy travel.
Unfortunately, the portage was unattainable for us, as well.  Amelia was determined to do it.  As I scouted ahead, she tested the scag-wheel built into the aft of our vessel by pulling it a good distance down the trail on her own.  Sadly, our canoe is 94 lbs with no yoke, our gear was slightly heavy, and it just wasn’t realistic, even for a quarter of a mile.  We ran the risk of scraping the bottom of the canoe absent a decent terrain-friendly cart.  Next time we’ll be better prepared.
We acknowledged as we retreated back across the first lake that we would have to look for an empty spot alongside the offensive sprawl of the other campers.  We found one initially, only to have the helpful residents of one camp point us to a quieter, less obvious spot on the other side of their camp.  For all the fault I find with their form of camping, I’ve never encountered a group that are not marvelously friendly.  They even gave us some of their wood and lit a fire while we set up camp as twilight descended.
This is where I admit, that as a Jew that tries to be observant, that we did all of this on Shabbos after synagogue.  I enjoy the wilderness, and with limited time to get to it during the work week, and with National Guard annual training looming, this was a rare opportunity for Amelia and I to take one of our many excursions.  We sang and observed Havdalah at our campfire, singing the Carlebach niggun for the introductory verse, and the Friedman tune for the blessings.
After that, we roasted KforP marshmallows from our considerable stash Leah gathered from the Pesach clearance at Shaws or Hannaford.  Amelia relaxed in the hammock, until we went to bed.  In the morning, I woke up for my morning ablutions and laid tefillin under the cover of trees, after which I took in the morning light and looked without success for a moose or two.  When Amelia woke up, we had a breakfast of oatmeal and coffee singles, then put in, and returned home.
This trip was why we moved to Maine.  Amelia and I have put our feet to most of the hikable east coast.  I’ve put my feet to most of the the continent, from Alaska to Florida, but there’s nothing quite like the tranquility of paddling in Maine.
By Brian Kresge
No Comment

Sexual Assault Reporting in the Guard: A Broken and Inconsistent System