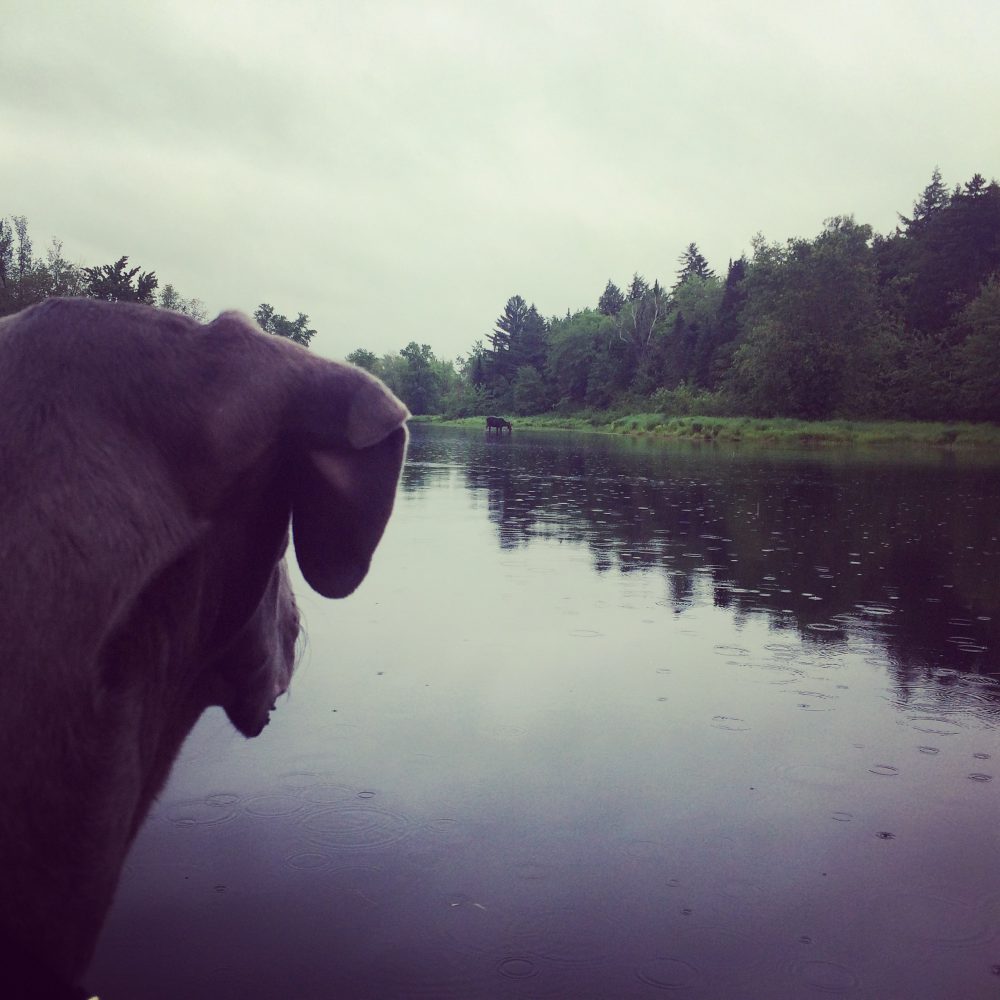 It was only about a quarter of the mile up the East Branch Penobscot from the Lunksoos put-in when Atticus and I saw the bull moose.

I’ve lived in Alaska and spent many nights in the Adirondack and White Mountains backcountry.  I’ve seen moose.  On Fort Richardson, Alaska, where I was stationed in the Army, my puny red Hyundai was once even parked in by a bull moose.  Since moving to Maine, however, I’ve caught glimpses alongside highways, but never a decent sighting, until this visit to Katahdin Woods & Waters.

The Sierra Club sends me all kinds of breathless news and alerts about KW&W being threatened by the Trump administration.  I’m not one to hyperventilate.  For one, the Antiquities Act grants the President powers to create National Monuments, but in a world where Acts don’t grant implicit powers, but only explicit ones, the hysteria is a bit overwrought.  It’s not that I’m not concerned about the status of various protected lands, but rather, I’m selective in how I react.  The Department of the Interior isn’t imbued with the power to undo National Monuments, that’s the bottom line.  Sure, there are other ways they could harm them, but dropping them from the NPS inventory is not one of them.

Even if they could, though, I refuse to panic.  There’s a notion that only the federal government can possibly manage this land effectively.  This rigid thinking ignores how the majority of public lands in Maine are managed, and managed well.

I take our trip to Debsconeag Lakes Wilderness a few weeks ago.  The distinctions between the Nature Conservancy’s management and that of the National Monument were not obvious, if there were any to be found.  The Golden Road, a private logging road accessible to the public, is a significantly better drive than the National Monument drive.  Certainly, the experience of paddling up the Debsconeag Deadwater to First Debsconeag Lake isn’t anything but geographically distinguishable from the paddle up the East Branch Penobscot, in terms of agency management. 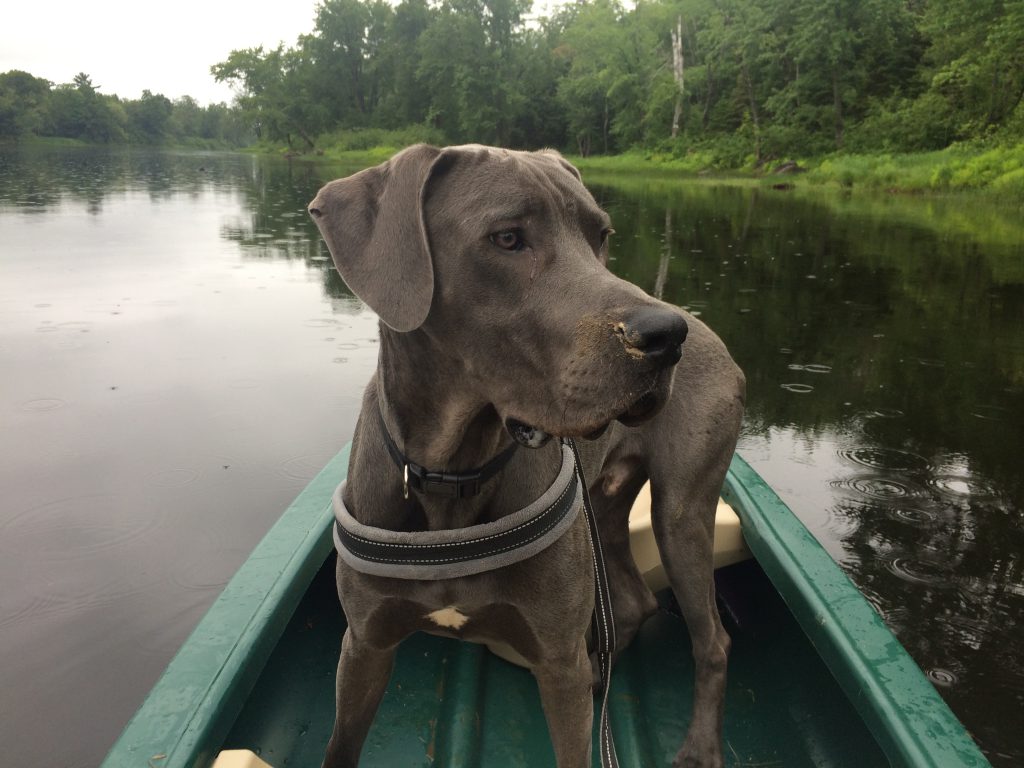 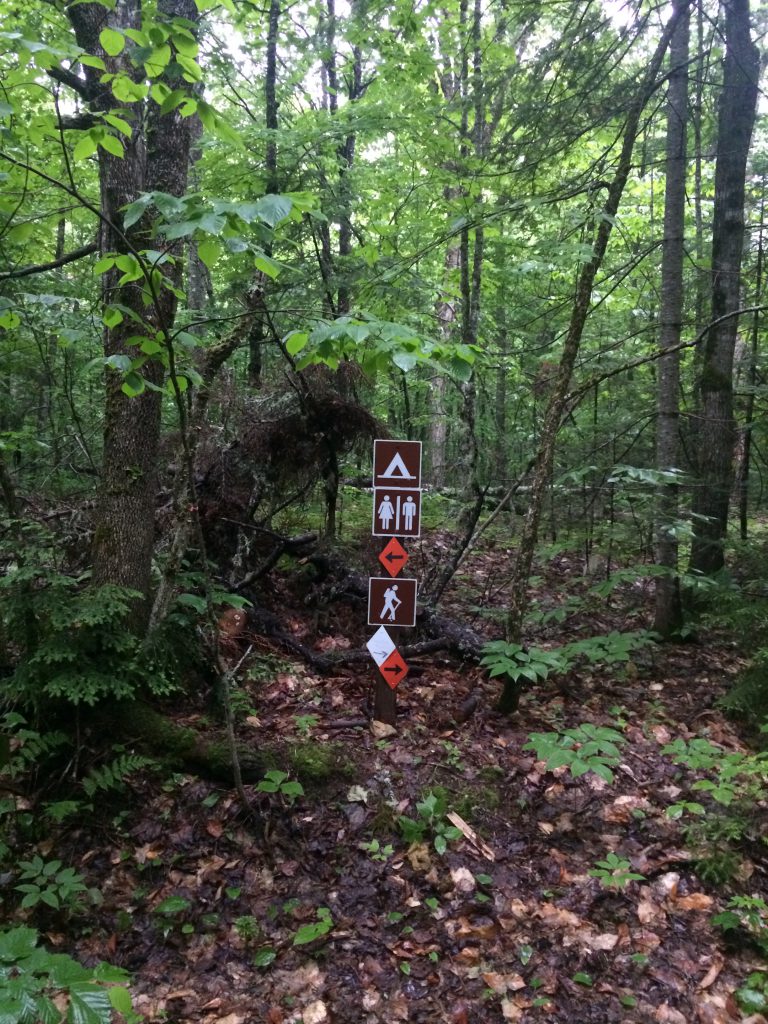 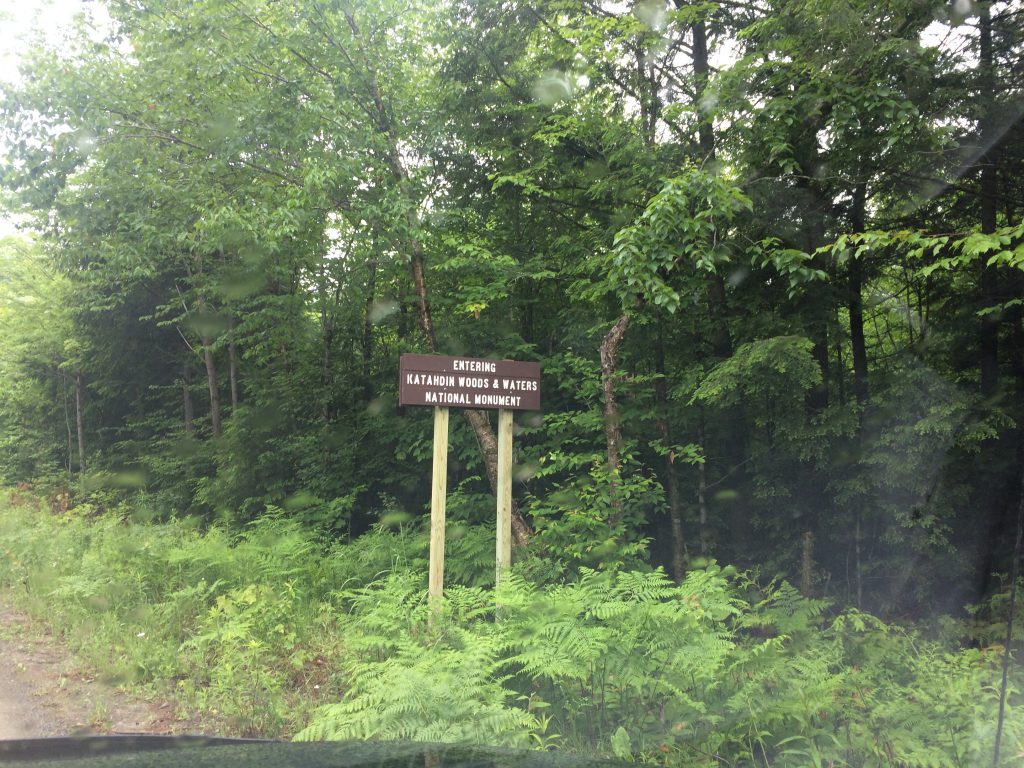 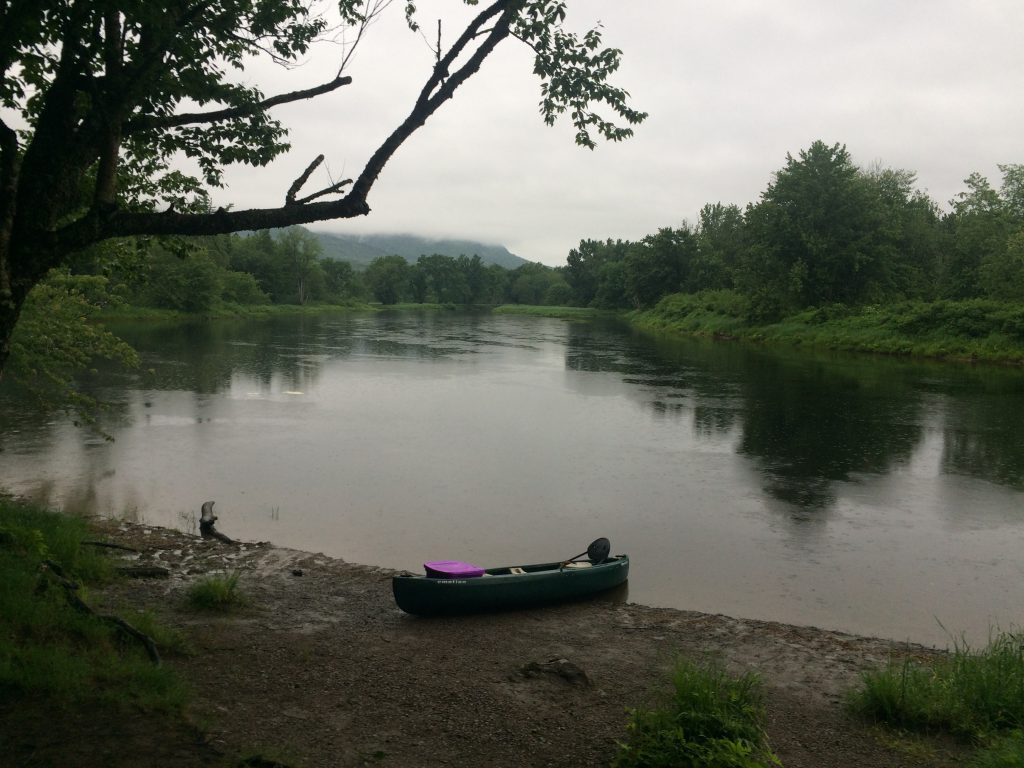 Maine’s government, people, agencies, and industries seem to work fairly harmoniously in the management of Maine’s wilderness.  If Katahdin Woods & Waters should lose its federal status, the land could easily find its way into a trust, or a new trust could be formed.

This is where I acknowledge that the title of this post is a little misleading.  Katahdin Woods & Waters is very much worth keeping in a protected status.  I suppose for my part, I care little for the means by which it is protected.

These debates often get locked into a binary set of arguments.  A line is drawn, teams are picked, and if you stray from either narrative, variations on opinions are not welcome.  There are certainly other National Monuments in greater danger than ours, and there’s a advantage to putting Katahdin Woods & Waters in the same frame o’peril as Bears Ears.

The National Park Service has been in funding atrophy longer than Trump has been President.  In many ways, I’m not clear that National Monument status creates an accessible wilderness, if it’s just a couple of rustic boat launches and backcountry campsites, trails, and facilities like privies and shelters that are already maintained by volunteers.  Is this really any more a boon to tourism just because it has a Park Service brochure, with its iconic white on black typography?

As I become further and further ensconced in left libertarianism, I recall my fight as a state house candidate against the seizure of land by a for-profit gas pipeline in Lancaster County, Pennsylvania.  My principal argument was that for those losing land to eminent domain, there was no democratic recourse at any level where they could redress their concerns.  Municipal government’s hands were tied.  State legislators claimed their hands were tied (though they easily could have amended Pennsylvania law to exclude non-infrastructure for-profits from eminent domain).  Federal representatives were of no use, if they would even be inclined to fight.  All residents had was an open comment period with FERC.  Individual court blocking actions are required, unfortunate because the companies can fete legal teams that the individual simply does not have access to.

We use the term “railroaded” for a reason, hearkening to another era of land seizures without the consent of the governed.

The process for establishing a National Monument is similar to this, in the inability for adjacent landowners and other local stakeholders to redress their concerns outside of court.  There is a comment period, and thankfully, Congress still has the power to act in ways it doesn’t for pipelines, but the semi-permanent status of Monuments shortcuts the democratic process.

I ask rhetorically:  is a National status really the only way to protect this land?  Is it really the best way to fund the kind of development it takes to make accessible public land?

And today in Bangor Daily News, someone responds that there are indeed other options, specifically one brewed in Maine, to greater benefit of Mainers.

Why is it intellectual sacrilege to ask these questions, even as a long-time Sierra Club member myself?

After Atticus and I paddled and hiked those lands ourselves (and really, I felt this way from seeing pictures), I believe Katahdin Woods & Waters must enjoy protection.

But when it comes to protecting wilderness, it’s not a true or false question, it’s multiple choice.  We don’t need to pit this as an either/or debate, and wilderness would be the better for it.