The Ship of Theseus 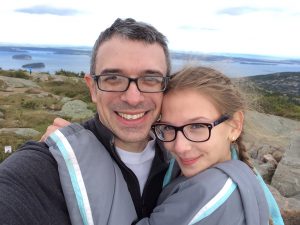 Amelia and Brian atop Cadillac Mountain.

Plutarch, in Lives of the Noble Greeks and Romans, asked if Theseus’ ship, having had all of its component parts replaced across generations, was the same ship as it was when it was first constructed.

I’m not terrifically consumed by the question at the cellular level.

Two years ago, if you told Leah and I that we’d be moving to Maine, I think we’d have both looked at you like you were insane. When some circumstances changed in our lives that were conducive to a move, and Leah had the opportunity to become Director of Childhood Education for a Bangor synagogue, we felt like it was finally time to make good on our dream to move to New England.

For me, it meant working from home full-time, which has been challenging in terms of sticking to a personal hygiene regimen, but rewarding. I’m in the process of transferring from the Pennsylvania National Guard to the Maine National Guard. For Leah, it has meant shifting how and where she does her errands. For Nezzie, it means licking different things than she used to.

For Amelia, it’s been a sea change, albeit a positive one. Living on 12 acres in the Maine woods has been good for her. She enjoys solitary and accompanied hikes around our property, especially to Cove Brook, which we have 650 feet of on our property. With her fresh start in a new school, she’s joined jazz band, she volunteers at the local library, she’s running for a position in student government, and she’s joined her school’s Civil Rights Team. She’s also active in ballet and her new Girl Scout troop. Life is more intimate in Maine, people are friendlier and more receptive to new ideas than Lancaster County, Pennsylvania. Amelia is a natural leader, and to see her blossom now that we’re not only emotionally removed from bad memories, but physically, has been astounding.

For all of us, joining a new religious community has been great. The Conservative shul where my wife teaches is right across the street from the Orthodox where I’ll daven more often than not. In Lancaster, Leah was a teacher in the religious school and I was Vice President of the Reform congregation, though I davened at the Orthodox one. The community was lovely, but Leah and I are wholly committed to Jewish continuity and halachah, even if we blur the line between Conservative and Orthodox in our household. Exposure to both Reform and Orthodox observance was helpful for Amelia as she cultivates her own Jewish identity, and for Leah and I. Asking the question “why” and merely accepting the sometimes self-referential, circular logic of rabbinic authorities is important to us, even if we’ll ultimately defer to them.