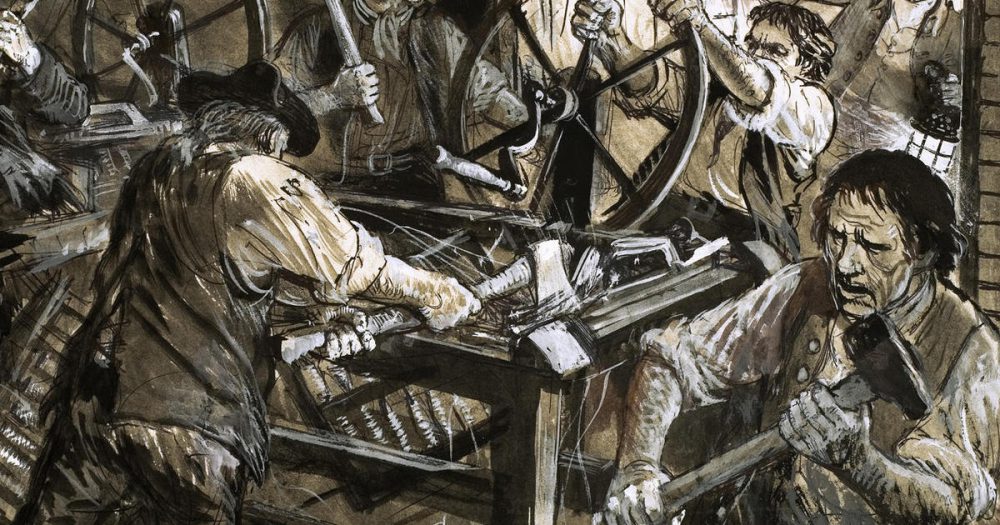 In the 19th century, textile workers afraid of machines replacing their role in their industry started destroying mechanical equipment as a form of protest. Now, they weren’t, as many people believe, opposed to technological advancement, but they were highly concerned about their diminishing role in the future of their work.

Today, we do associate that term with people who fear new technology. In my industry, which indeed does automate many workflow processes that once required human employees , we’re often flirting with the “Luddite fallacy.” This is the incorrect notion that removing the need for humans via technology will inevitably lead to permanent unemployment which ultimately wounds the economy. The reality is that when productivity costs decrease across a sector, we get closer to economic equilibrium, where the amount supplied more closely matches the amount demanded.

The challenge is in making sure the profit from gains in productivity makes its way back to the labor force. And that’s a thought for another day.

But the Luddites operated on a faulty assumption, one that is often axiomatic, that technology is here to harm us.

And how could it not? Today, cynicism about profit-motive, the mythology of sentient machines rising up against us, unfounded conspiracy theory, and a misplaced belief in the superiority of instinct or naturalism all combine to derail important advances for human kind.

This may be surprising to the few readers of my blog, considering my last post about Artificial Intelligence as potentially being bad for the Jews. What I would suggest isn’t a rejection of AI, but rather the imposition of controls, be they voluntary or legislative, in mitigating a gravitation towards entropy. My firm belief is that the neo-Luddites are far more dangerous than AI run amok.

The vagaries of the Green New Deal are fresh on my mind.

Nevermind the unfortunate and odd attack on “timber giants.” In a tough economy like Maine, the lumber industry is a well-managed and profitable resource. The same holds true for many states, be they Pennsylvania, Alaska, or Georgia, among others. Forestry, as a profession, isn’t in the state it was in its emergence a century ago. We’ve gone from deriving the most value from timber, to silviculture, a science-based form of forest management that tries to approximate natural cycles.

It’s not just harvesting as many trees as one can and floating them down a river. Forest management practices in the US and Canada have improved for the past five decades, and we’ve seen forest growth that exceeds timber harvesting.

I’m sure there are still practices that are debatably harmful, as certainly “forest” does not necessarily equate to wilderness or habitat. But “timber giants” relies on a nebulous understanding of the environment.

Next: The GND wants to achieve zero emissions without a nuclear component. One only need look to Germany’s Energiewende to see that it’s both debilitatingly expensive for impoverished sectors of Germany’s economy, and it’s actually increased dependency on coal. When people say, “we must emulate Germany,” I nearly vomit in my mouth. They have not created an energy utopia. They’ve created an expensive mess that is moving in the opposite direction of their 2020 energy goals.  We should learn from their mistakes: principally that if a nation like theirs cannot move to renewables to cover their needs, the United States, with its far greater range of ecological and climate diversity, definitely cannot either.

Germany also failed to make any moves in building heating and transportation, both of which the United States exceeds by orders of magnitude.  The Northeast alone is so dependent on fossil-fuels that there is no carbon-neutral energy future that we can tap by 2030.

And we’re all afraid of nuclear. A child of the 1970s, living next door to Three Mile Island, my parents threw us in the car and fled Lancaster County with the partial meltdown of Reactor Number Two. We know Chernobyl, and we know Fukushima. And thusly, because of the scope of the disasters, we look past the future of nuclear, specifically Molten Salt Reactor technology, which is advancing and is exponentially safer than current technologies.

I am a big fan of renewables.  I know more than few young soldiers in my Guard unit who are either employed or are training to be employed in work involving wind turbines here in Maine.  I’m even a big fan of subsidizing the renewable industries, solar panel installations, and more.  Just because it’s an incomplete solution doesn’t mean we shouldn’t go all in as a nation.  But we should learn from Germany’s mistakes instead of glossing over their failures.

That means not excluding nuclear, and in many cases, hydro-electric, from our energy policy calculus. Next: The GND wants to support “family farming.”  Organic farmers cheer!  The problem is, organic farming or “family farming” uses more land to produce less output.  Seriously, what is known as the “yield gap” (the difference between a crop’s potential and what is realized) is significantly higher with organic farming.  This is counterproductive.  The GND talks about the consequences of climate change, and food shortages certainly rank among those consequences.  Organic farming, at its inception, absolutely had a leg up on conventional farming in achieving soil health, but now, industrial farming has found more cost-efficient and carbon-neutral means to achieve the same thing.

The bottom line, and the fallacy of the Green New Deal, is the assumption that sustainable farming can only come from “family farming” (which is odd, considering many people working for conventional agriculture, um, have families).  There are good ideas and practices from organic farming that can and have been synthesized into and improved by industrial agriculture.  Vanity farming projects and Stuff White People Like co-ops are marvelous, and I think we ought to encourage them, but not at the expense of the looming global catastrophes that the Green New Deal purports to concern itself with.

The Green New Deal, while well-intentioned, buttonhooks neatly with the problems brought on by the anti-vaccine movement.  I don’t know what’s happened, but our nation, on the whole, relies on reflexive and poorly-informed understandings of science.  You have climate science deniers on one hand, and you have an equally damaging contingent of people with no firmer understanding of science, apparently including Rep. Ocasio-Cortez.  Instead of crafting a climate change resolution that recognizes that science—and not ideas that are ultimately regressive—we get something my daughter might have produced last year in her 8th grade civics course.

To those who would say “it’s a start to a conversation” or “it’s better than doing nothing,” I disagree.  Replacing stupidity with more stupidity presents an equilibrium of stupidity.  At least with a profit motive behind climate science denial, for some industries, being sustainable will mean adopting better practices just out of competitive advantage.  It’s not a panacea, but it’s more reliable than false solutions presented in the Green New Deal.

My recommendation to anyone looking at this immovable object meets unstoppable force scenario between two classes of Luddites: buy arable land well away from the coast and prepare for the worst.

In the meantime, I’m just going to lament our nation’s continual surrender to its scientific illiteracy.