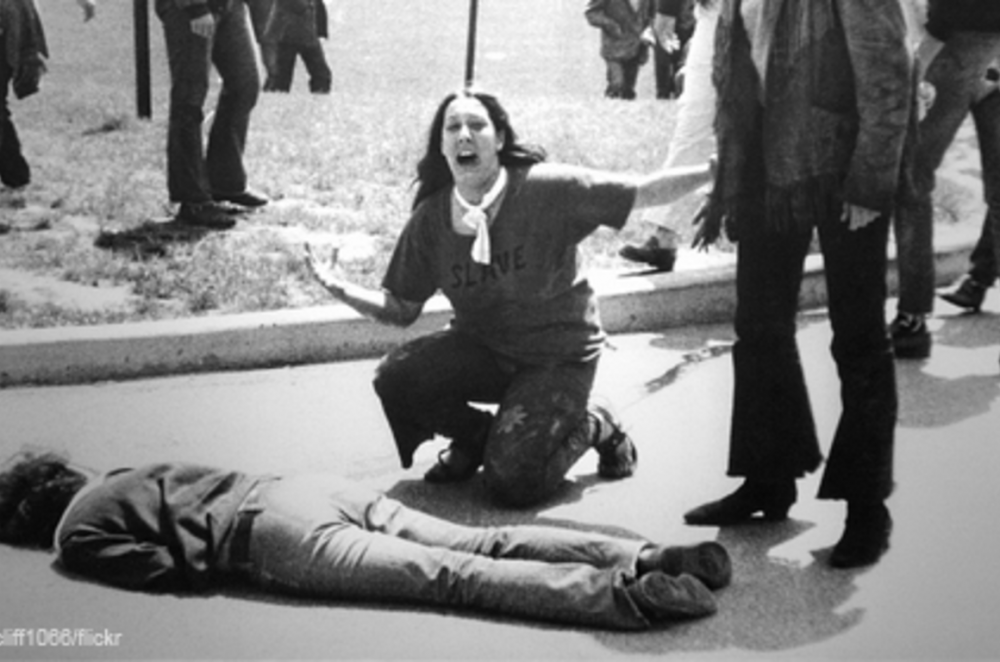 Kent State: No Laughing Matter for the Guard

Yesterday, and I will not identify my unit because I don’t want to make this specifically about my chain of command, our company commander asked our first formation what anniversary falls on May the 4th. Given our upcoming training, an internal groan started in the pit of my stomach as I realized where this was going.

“The shooting at Kent State,” he began, describing the protestors at the Ohio university, and describing how many rounds were fired by the National Guard soldiers, capping it with “after our annual training this year, if we’re called out for a civil disturbance, you better shoot more than four protestors.”

Uncomfortable laughter ensued. I did not participate in that laughter.

I am frustrated by this for a variety of reasons. First and foremost, I think it’s safe to assume that none of us enlisted to fire on our fellow Americans, no matter what we feel about their activities. Second, most of our soldiers are very young, and though we assume they’re intelligent enough to make moral calculations on their own, countless studies and human history demonstrate they will not.  This was terrifically disappointing.

I get the joke, but Kent State is the equivalent of My Lai for the Guard. Gratuitous violence brought to bear on vulnerable citizens by, given the nature of the military at the time, people possibly hiding from Vietnam service in the reserves.  They shot young adults at a university, citing fears for safety, claiming “snipers.”  Yes, the protests were contentious, but the use of bayonets and live rounds was always questionable.

This was, to me, the National Guard’s worst day in recent history. Not something to be celebrated, ever.

We so often talk about moral leadership, but over and over, I find it in short supply in the Guard. On the same drill weekend, to hear soldiers lectured about “standards” because, gasp, the demands of the civilian economy on citizen soldiers make it difficult for many to meet standards we have in common with full-time soldiers, while they have to stand fast and be subject to a celebration of the worst sort of state power—it’s sickening to me.  It sends our soldiers mixed signals.  We have troops berated for having health care issues that are impactful of required duties, feeling like they have to excuse a medical need to “take it easy.”  We have troops working two or three odd-shift jobs to make ends meet, struggling to find time for physical fitness.  And I’m not making excuses – the Guard has the option of administrative discharges for circumstances where it’s just not the right fit.  We tend to think of it as punitive…”if you can’t pass a PT test, we’ll take rank,” when the question should really be, in many cases without recrimination, “are our needs and demands mutually compatible?”  It’s clear that the reality is about numbers, not standards, and the rhetoric does not match the reality.   With that, set aside the frame provided by a chain of command that dehumanizes an American protester, what evidence does the soldier have that a chain of command will have their back if they are put in a position where they come up on the wrong end of a moral decision?

In the scope of our service, we demand a lot of personal motivation; our soldiers must be self-righting ships.  Our concern often only intersects when we meet at drills.  We talk about standards, but hitting them is largely hit or miss.  Is japing about the execution of citizens exercising their right to assemble and their right to free speech an aspirational standard, given the context?

Asking for a friend.

Kent State, of course, isn’t the worst of it.  In Pennsylvania, we seldom considered how armory construction reflected the 1877 Railroad Strike.  Kent State was the horror of the Vietnam Era, but how many workers were bayoneted and shot in Pittsburgh (20 killed, 29 wounded), the Reading Railroad Massacre (10-16 killed, hundreds wounded), with others killed from Shamokin to Scranton.

Yes, the Guard is designed to deal with insurrections, but in the late 1800s, we were used to protect the interests of rail robber barons, and during the Vietnam Era, we “protected” the public from kids disinterested in a compulsory war they had no say over, sent by a generation that should have damn well known better.

That is not the National Guard I serve in.  I joined the National Guard to serve my community and when under true threat, protect my country.  My favorite time in uniform remains our lengthy stint in Katrina-ravaged New Orleans.  Yes, there were moments when we were to backfill civilian law enforcement, and help maintain order.  Our biggest contribution, however, remains the immediate help and rebuilding we provided to people all along the Gulf Coast.

I am glad our commander brought up Kent State.  However, I wish he would have used it as a reminder of what the National Guard ought not do.

4 Dead in Ohio is nothing to laugh about.  It was a national tragedy then, and it should be our “teachable moment” shame in the National Guard today.

We should value our oaths so much that we would fall on our own bayonets before we ever put unarmed protestors in our sights.