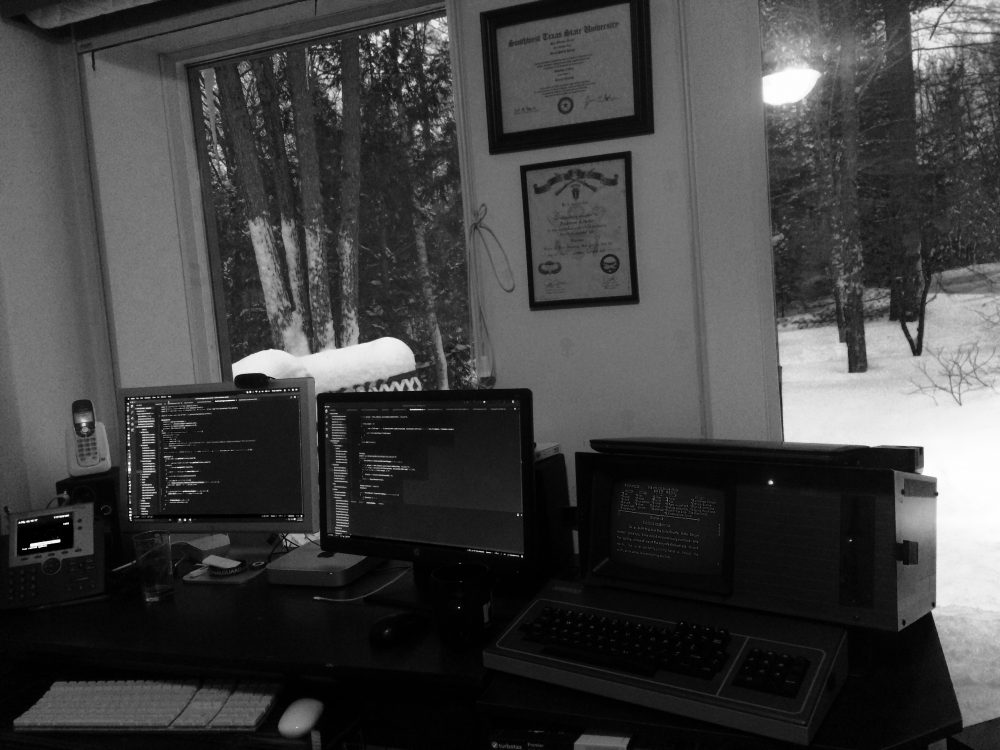 John Chamberlin died at the age of 85 in April of 2001, and I have his computer.

I frequently tell the story about my romance with KayPro CP/M machines.  I learned Pascal and BDS C on the KayPro 2X my father gave me in the 1980s.  I did my homework on that computer.  I coded derivatives of the Citadel BBS software on that computer.  When I aspired to be a writer, I probably kept my parents awake with the satisfying, metal reverberations of its keystrokes.  In the 1990s, we moved on to 80286s and Macs, and my father parted ways with the 2X.

Last year, I acquired a functional KayPro 10, the 4 Mhz Z80 CP/M luggable with a 10MB (yes, megabyte) hard drive.  I intended to get it up and working again, as I still have yet to find a word processor I love as much as WordStar 4.  I spent some time building a connection between it and my workhorse Mac via null modem and terminal software, and after successfully getting WordStar 4 working, we started our move to Maine.

With a record amount of snow falling recently, I was able to revisit my effort to use this machine fully for my writing.  A quaint interface to /dev/cu.usbutil, and I’m able to create blog posts right from MITE.  Sure, it’s kludgy, typing HTML code rather than indulging the use of a GUI, but there’s a romance to it.

If you’re a nerd.

As a curious aside, MITE is the same software that Arthur C. Clarke used on his KayPro II in Sri Lanka to transmit script edits for 2010 to director Peter Hyams.  This still inspires me to this day, and if you can find a copy, The Odyssey File captures the humor and frustration of this then ground-breaking achievement.

CP/M, as a precursor to DOS, used a finite number of what were called “user areas” on a disk, from which DOS (and later Windows) directories are derived.  This KayPro 10 has a 10MB hard drive, segmented into two partitions, 5MB apiece.  The machine was manufactured and sold in 1983, and still has all of its original software on it.  A KayPro-specific WordStar 3.3, the PerfectWriter/PerfectCalc/PerfectFiler suite, MicroPlan (a decent spreadsheet, for its day), and dBase II.  It has the usual assortment of ASCII-based games, like Ladder and a PacMan clone.

It also, happily for me, has the SBASIC and BDS C compiler on it.  One of my hobbies with old computers is trying to write newer concept programs using older technologies.  The 64K memory ceiling and limitations of the Z80 offer coding compromises with few modern equivalents in an age of garbage collections and virtual memory.  It’s good practice and cultivates time-tested best practices, not to mention the nostalgia.

Aside from having a hard drive instead of dual 360K diskette drives, it’s a portal back into my youth–the formative years–when I embarked on a journey into the vast oceans of geekdom.

Poking around on the “B:” partition, in user area 1, I found a large quantity of WordStar documents, all of it outdoor writing detailing travels in the Western US, Mexico, and Alaska.  Only one document, an “About the Author” was particularly revelatory.  John Chamberlin, former insurance agent turned outdoor writer.  He wrote for Outdoor Life, American Hunter, a weekly column for the “Woodinville Weekly” for a decade.

These writings are over thirty years old, exquisitely preserved on the platter of a an almost 35 year-old Western Digital hard drive.  There are articles for magazines, the manuscript from his book, “Wandering the West.”  He writes about places that are familiar to me, particularly his trips to the Kenai Peninsula in Alaska.

Chamberlin is very descriptive of his adventures, but there’s very little about him contained in his work, aside from his terse “About the Author.”

After finding his work and putting together who he was, I decided to see if I could find him, only to find an archived obituary from The Everett Herald from 16 years ago.

John H. Chamberlin, 85, passed away April 12, 2001 in Bothell.  He was born November 17, 1915 in Provo, UT.  John serve in the U.S. Army in Europe in WW II. He worked for the John Hancock Mutual Life Insurance Company for 31 years. He was General Agent from 1956 until his retirement. After retirement he became an outdoors writer, contributing articles to local and national fishing and hunting magazines. He wrote a column for the “Woodinville Weekly” for ten years. John also wrote a book titled “Wandering the West”. When he was no longer able to fish and hunt he shifted gears again when he joined several amateur musical groups that entertained locally…

I’ll try and contact his surviving descendants and see if they’d like me to digitally preserve and send them John Chamberlin’s work.

I suppose it shouldn’t surprise me, given the age of the computer, that its original user passed.  Many of my early mentors in the computer world, starting with the Lancaster Microcomputer Users Group (LMUG) are at least in their late 60s.  Andy Kay, the man behind this robust machine, quietly passed a few years ago.  Many of the people responsible for foundational concepts in computer hardware and computer science are gone.

It was a very similar feeling to when my father’s cousin died.  We recently became friends on Facebook.  He was prolific in his postings about friends and family.  When he died unexpectedly, the immediacy of recent Facebook posts was disconcerting.  We can still interact with his digital presence even after he is gone.

Is it just that I’m now over 40, or does the digital age preserve us with a timelessness that the print age did not?  There’s such an odd intimacy to our digital footprint, with our ordinarily mundane life’s narrative laid bare.

John Chamberlin lived on the complete opposite side of the country from me, lived his life in an entirely separate age, and yet a cast-off computer opened a window into his world.