From time to time, certain realities punch me in the face.

A recent Tweet by Tom Nichols this week caused a firestorm for a variety of reasons.  It didn’t upset me so much as it did others; in many ways I think Tom Nichols is an admirable and very smart dude, and in the age of social media, we can all easily stick our foot in it all too easily: 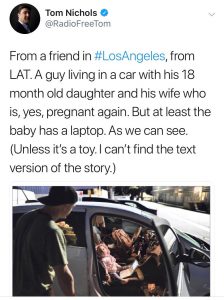 Reading an article that spoke more to the judgment present in his tweet, I noticed a statistic that resonated with me, from a study in The Journal of Social Distress and the Homeless from 2017.  94% of homeless adults entering temporary housing have some access to a mobile phone.  As a programmer, I’m supremely grateful for this component of American capitalism and the advance of the Internet age.  The fact that a homeless father has a window to the world for himself and his baby as they live out of their car should prompt feelings of hopefulness for their future, not opprobrium.  In the same way people that judge SNAP recipients for living “high on the hog” with grocery purchases (when this is very, very far from reality due to demographics and availability of fresh foods, both urban and rural), it’s misguided and mean-spirited.

But taking aim at the poor and blaming them in varying ways for their plight is nothing new under the sun, not since Calvinism inflicted itself on Western Civilization.  It’s all variations on a theme of the spiritual insufficiency of the poor, that sad mindset that has taken hold of so many Americans.  If it wouldn’t be a laptop in front of a baby, it would be criticism for the quality of shoes she was wearing.  It’s horseshit, and the people that go in that direction ought to be ashamed.  And it’s why I resent the positioning of “Judeo-Christian” values.  Denigrating the poor isn’t in my value system as a Jew, and it wasn’t in their savior’s value system as a Jew, either.

But what can I do about it, as a programmer?

For one, for those of us responsible for developing web sites at any point, we must commit to responsive design. A significant number of government websites, from municipal to federal, are not mobile-compliant.  Worse, many of them are not Section 508 compliant, which means on top of not being easily used by mobile users, users with disabilities also may struggle with using them.

When we discuss it in my world, responsive design is framed around search engine optimization and “user experience.”  I also would term it as the appropriate social justice design paradigm.  Using Bootstrap, ZURB’s Foundation, Semantic UI or others can make what used to be a cumbersome process far more cookie cutter.  I point out others because there are many of us, answering client needs, that cannot avoid the need to render an exquisitely-styled site, but that cannot come at the expense of usability.

That usability privilege comes in other places as well, such as with app design.  Using cross-platform products like Ionic and Xamarin to make iOS and Android apps means that you’re creating a ubiquity of user experience that is more consistent and approachable.

We need to press our university programs to introduce ethics in AI and machine learning development.  As I’ve previously opined, machine learning and algorithm development can be deleterious for vulnerable groups in our society simply because of our biases.  It falls increasingly on us to consider the ethical and moral implications of the systems we build.  If we’re commissioned to write criminal justice algorithms, we must raise the flag if a system needs adjusted for how often indigent communities are put in contact with the police.  If we’re writing actuarial risk algorithms, if we’re writing loan systems, we have an obligation to push back from the programming perspective and let stakeholders know what the implications are.  It can be difficult to see at our level, but if anyone will identify it first, it will be us.

We also need to expand, as programmers, our mentoring efforts.  From rural white poor, to inner city minorities, there is a very narrow band of people entering the STEM fields generally.  We can and should do more in our communities to increase learning.  Considering volunteering with child or adult coding workshops.  Start one if there isn’t one.

But what about service usability, and not just development practices?

Two years ago, we saw a viral video about someone using Amazon Prime to help the homeless.  Amazon Prime represents a great cost savings for the indigent, but unfortunately, reviewing Amazon’s returned as undeliverable guidance highlights how problematic delivery can be for people who may be living out of their car.

I circle back to our religious organizations.  Even in this time of heightened security for synagogues, I would suggest we consider opening our doors to allow Amazon Prime package delivery for the indigent at our community centers and synagogues.  PO Boxes are often too small, and only one carrier will deliver to them, sometimes not with affordable or timely options.  Security at transitional living can be such that there’s a risk of theft with package delivery.  We can background check or vet people we offer this service to, but what a wonderful expression of our faith if we would open our doors to this service.

I grew up literally across the street from our local welfare office.  When I was a kid, our mostly white, working class neighborhood looked down on the people seeking public assistance.  When they used their food stamps at the grocery store, there was and remains judgment for the quality of groceries being purchased.  Steak and lobster?  No, you should only be eating Hamburger Helper, you ne’er-do-well.  People that understand poverty dynamics and family privilege understand why a kid who lives in poverty will have the latest game system or new Air Jordans.  “If they had not spent that money on x, they would have y,” but that’s not necessarily true.  We live by Franklin-esque axioms far too often; a penny saved is, for the working poor, not a penny earned.  They aren’t taking lavish vacations.  They’re living hand-to-mouth in conditions that lead to increased risk for depression, obesity, heart disease, domestic violence.  When they have extra money, the tendency is to indulge vs. invest, even if that means they struggle when a contingency comes around (which would also wipe them out).

But a laptop or a cell phone doesn’t even fall into that category.  These devices, just as they are for the rest of us, are a lifeline.  They allow remote education.  They allow contact with families.  They allow financial management and resource discovery.  Yes, they can entertain the kids when they’re sitting in the small space of their car as they watch the dream of affordable housing pass them by.

This culture has to do better.  We have to acknowledge that life is simply unaffordable for people unhomed by a seismic shift in the workforce that has all but killed the unskilled labor market.  As programmers, many of the problems are beyond our ken to tackle.  But we are positioned to do more than we often presently do.